There’s no doubt in our minds that Peru has the best dirt road touring on the continent. In fact, there are few places in the world that can match it for high altitude, remote cycling. For lovers of quiet unpaved roads, this is the country to head for – plan your time in the Andes so as to be here in the May to September dry season.

The scenery in the Peruvian mountains is breathtaking, with some of the Andes’ most spectacular subranges. A bike is the perfect way to explore the huge network of small mountain roads which snake through the country – roads which may or may not appear on published maps you manage to lay your hands on. The climbs are often huge, the culture is fascinating, the local people are extremely friendly, and if you spend all your time on the quiet roads you won’t have to deal with the poor driving.

Peru has a near monopoly on the high passes in the Andes, and has most of the toughest routes we know of. There is no easy way through the Peruvian Andes – this is a huge country, and the vertical terrain makes for slow going. If sticking to the easier, main roads through the hills (often referred to as ‘The Mountain Route’), count on spending at least 2 months travelling from one end of the country to another. If taking a quieter, unpaved, route count on at least 3 months, preferably more. 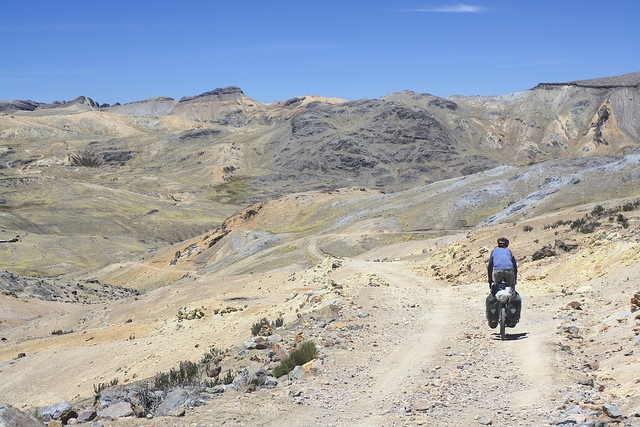 Border Crossings
Peru has borders with Chile, Bolivia and Ecuador in the Andes (as well as with Brazil in the lowlands).

To Chile there is only one option – the straightforward crossing at Concordia on the Panamericana between Tacna and Arica.

To Bolivia there are a few options – the most popular and easy being on the southern shores of Lake Titicaca at Yunguyo/Copacabana; or a bit further south at Desaguadero. It is also possible to cross on the eastern side of the lake between Moho and Puerto Acosta, but this requires some planning to get the relevant stamps in your passport – see here.

To Ecuador the busiest route follows the Panamericana, but plenty of more adventurous cyclists cross further to the east from Jaen over to Zumba and Loja.

Maps
By far the best maps we’ve found for Peru come in electronic form, created by the Peruvian Ministry of Transport and Communication (MTC). These online maps are available for download in PDF form, by Department, and show far more roads and are far more accurate than any of the paper maps of the country you’ll be able to find. However they don’t print well, and they’re still not 100% accurate. Roads shown on these maps almost always exist, though there are many other small roads, particularly around Departmental boundaries, which don’t show up.

There are many paper maps of the country, but as the road network is so huge, none are particularly useful if you want to get out onto the small roads, as they simply don’t have enough space for the little roads. Most show the larger roads with sufficient accuracy, so if you want to cycle the main roads through the mountains from Puno to Huanuco to Huaraz, or want to take the Panamerican Highway, these will be sufficient.

Your best bets if you want to get off the beaten track are to use the MTC maps, ask a local person (preferably someone with a vehicle who is more likely to know the roads), get information from cyclist blogs, or spend hours poring over Google Earth.

Weather
May to September is generally the dry season in the Peruvian Andes and the best time to cycle there. February and March are the wettest months when high routes are particularly likely to be closed by mud or snow. The onset of the rainy season is accompanied by frequent afternoon thunder and hail storms. Though the Peruvian Andes are not known for being exceptionally windy like regions further south, the weather can still be unpredictable so be prepared for bad conditions at any time of year.

Road Conditions
The most memorable features of mountain roads in Peru are the long climbs and descents on beautiful sweeping zigzags. The gradients on larger roads in Peru are rarely steep, however many of the climbs are HUGE. Sticking to the main routes is far easier then heading out onto small dirt roads however. On these the gradients are often steep, and the climbs can be even bigger. Unpaved conditions are a mixed bag – often there are good surfaces, sometimes they are shocking.

Although we have very little experience on busy or paved routes in Peru we have heard from numerous cyclists that the drivers are amongst the worst on the continent. Another reason to avoid the tarmac and head out on the quieter roads.

Getting Transport
Like most South American countries the best way to get about on public transport in Peru is by bus. Getting the bike on board is usually little hassle, though there may be a small charge. On more modern coaches between larger towns bikes will be put under the bus, while on older buses in smaller places they may well end up on the roof. Note double decker buses almost always have far less room for luggage (they have smaller bodegas) than single deckers.

As always, keep a very good eye on your kit at bus stations to guard against opportunist theft. It’s a good idea to buy a cheap plastic bag (of the tartan variety) to put all your panniers in so you only have that and your bike to watch over. It’s much harder for someone to run off with a bulky 20kg bag than to just grab a pannier and leg it.

Encomiendas
If you can’t face lugging all your kit up the big climbs, an option is to send a parcel of kit you don’t need for a while ahead using the coach companies’ encomiendas (cargo) services. We only have anecdotal evidence of how reliable these services are (from others, and having used them ourselves numerous times without issue). To maximize the chances of your parcel arriving at its destination it’s a good idea to ask local people which are the most reputable firms, disguise your kit so it doesn’t scream ‘gringo bag’, don’t send anything you can’t afford to lose, and check beforehand how long they’ll keep the package for you at the destination. Cruz del Sur are one of the larger companies, with buses to destinations all over the country.

Camping
Apart from in well known trekking regions, camping isn’t common in Peru. However finding a bed for the night is relatively inexpensive as Peru is on a par with Bolivia in terms of cost, and so is one of the cheapest countries in South America. In late 2010 we found it was always possible to find a double room for less than $15US and it’s not unusual to be able to find one for less than half this price.

Note that on the Puna in the south of Peru the atmosphere is so dry that tent fabric shrinks and it can become very difficult or impossible to get your tent poles in. Zips become fragile and regularly break in the dry atmosphere, so treat them carefully. Also be aware of how much damage UV can do to your tent. UV degrades tent fabrics and it is particularly strong in high altitude areas.

Food & Drink
Food in the Peruvian Andes is nothing to write home about, though you may well still appreciate it if you’ve just come from Bolivia.

Chifas (Chinese restaurants) can be found in many towns and generally serve generous helpings of good food at a decent price. Two course almuerzos (lunches) and cenas (dinners) served by most restaurants are a bargain.

Bike Shops
In Lima you’ll find decent bike shops, and in touristy places like Cusco and Huaraz you’ll find ok ones, though quality gear for touring may be difficult to source. Cycling isn’t common in most areas of the Peruvian Andes and as a result in many villages and towns it will be difficult to find any spares at all. It may be possible to order spares from a shop in Lima and get it sent via encomiendas on a bus. Anibal at Ciclo Turismo Peru has been known to send parts to stricken cyclists via the Cruz del Sur bus company. As with other Andean countries, 26” tyres are the easiest size to find.