Bolivia has a lot to offer as a cycle touring destination. Its main draw are the salars and lagunas in the south-west of the country, though its most famous road is the old road from La Paz to Coroico, still known as the ‘World’s Most Dangerous Road’.

The Bolivian Andes are not always the easiest of cycling destinations. The west of the country is all above 3,500m and if you are travelling on unpaved roads, surfaces can be poor, maps are unreliable and signposts are scarce to non-existent. As a result many cyclists make a beeline from Peru to Argentina, taking the route of least resistance from Titicaca to La Paz, Oruro, Uyuni and Villazon. This however means missing out on some spectacular cycling, so if you don’t mind putting in the extra effort there are plenty of rewards on offer for diverting off the main highways. 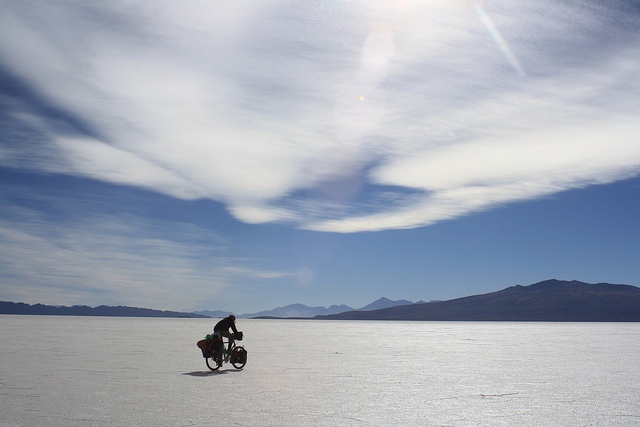 Border Crossings
Bolivia has borders in the Andes with Peru, Chile and Argentina (as well as with Brazil and Paraguay in the lowlands).

To Peru there are three options. The most popular and easy routes are the two on the southern shores of Lake Titicaca at Copacabana/Yunguyo and a bit further south at Desaguadero. It is also possible to cross on the eastern side of the lake between Puerto Acosta and Moho, but this requires some planning to get the relevant stamps in your passport – see here.

To Chile there are seven route possibilities. The most northerly is the little used crossing from Charaña to Visviri. The most southerly is the crossing at Hito Cajon between Laguna Blanca and San Pedro de Atacama, which is frequently used by cyclists. The only paved route is that over Paso Chungara/Tambo Quemado on the Arica-Patacamaya highway. Ollague-Estacion Avaroa and Pisiga-Colchane are the busiest of the other options, though these are still on quiet roads.

The main and most westerly route into Argentina is from Villazon, in the Department of Potosi, to La Quiaca.

Maps
Unless you are sticking to main, paved highways, take anything you see on a Bolivian road map with a pinch of salt. Villages and roads marked on maps may not exist, and many towns and roads which actually do exist aren’t marked on any maps.

You might want to buy a number of different maps to see where they concur, but even this is no guarantee that they are correct rather than just copying each other’s errors. When following small roads having a map is most useful for learning the names of towns you’re aiming for, as you can then ask people you meet where the road you are on is headed, and have some idea where they are talking about in their reply. Beware that some villages have more than one name, so the names on maps might not be the same as those used locally.

Perhaps to some extent it is understandable why mapping on the altiplano is so poor – much of western Bolivia is so flat that 4×4 drivers just drive wherever they fancy, so the route of choice changes more often than any maps are updated.

Signposting is not common on unpaved roads. The best ways to obtain reliable information are by asking local drivers, reading cyclist blogs and looking at satellite pictures on Google Earth. The Viajeros Mapas website may also be good, though we haven’t used it – if anyone does please let us know what it’s like.

Weather
The rainy season runs from November to April (summer) and during this time some roads can become difficult to negotiate due to mud or flooding. At the height of the rainy season the Salar de Uyuni can flood and it may not be possible to cross on two wheels.

Winter, from May-October, is the dry season and usually considered the best period for cycling in Bolivia. Days are invariably clear and warm, but the moment the sun goes down the temperature plummets. On the altiplano in the west of the country nighttime temperatures are regularly below -10°C and it is not unusual for temperatures to reach -20°C or even lower. Camping in the Sur Lipez can be a good chance to test out whether your sleeping bag’s ‘Extreme temperature rating’ actually means anything in practice.

The Sur Lipez in the south-west of the country can, like surrounding areas in Argentina and Chile, be extremely windy, with prevailing winds from the west. Any cycling trip in that sparsely populated region can be a serious undertaking – make sure you are sufficiently prepared.

The Yungas are best cycled in the dry winter when the temperatures and bugs are just about bearable. In summer the roads are muddy, rivers become impossible to ford and it’s too hot to have any fun on a bike.

Road Conditions
There isn’t much tarmac in Bolivia, so if you decide to keep to any paved roads you find, expect to be on a major route and sharing it with plenty of traffic.

Unpaved routes in Bolivia have a reputation for being tough on cyclists with many corrugated and sandy kilometres. While there are certainly some poor surfaces on the Bolivian altiplano, there are also plenty of quiet unpaved roads with surfaces which are fine to cycle about on.

Bolivian roads are rarely steep – the one big exception we found to this was in the north Yungas where the gradients are extremely steep.

Getting Transport
Like most South American countries the best way to get about on public transport in Bolivia is by bus. Getting the bike on board is usually little hassle, though there may be a small charge.

As always, keep a very good eye on your kit at bus stations to guard against opportunist theft. It’s a good idea to buy a cheap plastic bag (of the tartan variety) to put all your panniers in so you only have that and your bike to watch over.

Camping
Camping is rare in Bolivia. However as it is one of the cheapest countries in South America, finding a bed for the night is relatively inexpensive, especially in small towns a long way off the tourist circuit. Many parts of western Bolivia are sparsely populated, so finding a spot to wild camp is not normally difficult. Take the usual precautions of hiding from the road, staying clear of rivers which might surge when it’s raining, avoiding ridges if there’s lightning around and you should be fine.

Note that on some parts of the altiplano the atmosphere is so dry that tent fabric shrinks and it can become very difficult or impossible to get your tent poles in. Zips become fragile and regularly break in the dry atmosphere, so treat them carefully. Also be aware of how much damage UV can do to your tent. Tent fabrics degrade in UV, and it is particularly strong on the altiplano.

Food & Drink
Few people cycle in Bolivia purely for its culinary delights. On the altiplano you’ll soon get used to a diet of soups, alpaca steak, egg, quinoa, chuño, and rice (which doesn’t cook properly due to the altitude). Most restaurants are extremely cheap and the two course almuerzos and cenas are usually a bargain. The hearty soups are more often than not the highlight of these meals.

Buying supplies in towns can be great fun. Women in voluminous skirts sit amongst piles of produce and you can buy as much or little as you like.  In remote villages you will come across many “all but nothing” shops that sell an enormous range of products but nothing a cycle tourist really needs. If you’re unlucky you’ll find yourself eating Cremositas biscuits and cream crackers for longer than is healthy, and salivating at the thought that in the next village you might finally strike it lucky and lay your paws on a tin of delicious corned beef…

In larger cities or if you head to the Yungas or the lowlands there is a larger variety of food on offer, as eastern Bolivia grows an abundance of tasty fruit and veg.

Bike Shops
La Paz has numerous bike tour agencies which cater predominantly for day trips down the ‘World’s Most Dangerous Road’, and you may be able to find spares at one of these. The guys at Gravity are very helpful and may be able to sell you parts, help you import some, or rent you a bike. There are a couple of bike shops selling Shimano parts on Avenida Juan Pablo II in El Alto. Cycling is more common in cities which lie at lower altitudes like Cochabamba, but on the Bolivian altiplano it is very rare to see a cyclist, and even rarer to see a cycle shop. 26” tyres are the easiest size to find in Bolivia.