There is some outstanding cycling to be had in the Chilean Andes, however to link it up without venturing into Argentina can mean enduring long stretches on dull roads. In the north, spectacular scenery and riding can be found along the Bolivian and then Argentine borders – Parque Nacional Lauca, Reserva Nacional Los Flamencos, PN Nevado Tres Cruces all have wonderful landscapes. In the southern part of the country the Lake District has some excellent cycling and south of this is the Carretera Austral, a beautiful road that is the most popular cycle touring route on the continent.

In the central regions however the geography of the country makes a tour on quiet mountain roads difficult to execute. With most valleys running east-west and the roads following them, it is tricky to travel from north to south or vice versa without spending periods on busy paved roads.

Because of this we only cycled in the northern and southern parts of the country, and all but one of the roads described on our Chilean Routes page are in the Puna in the north-east. 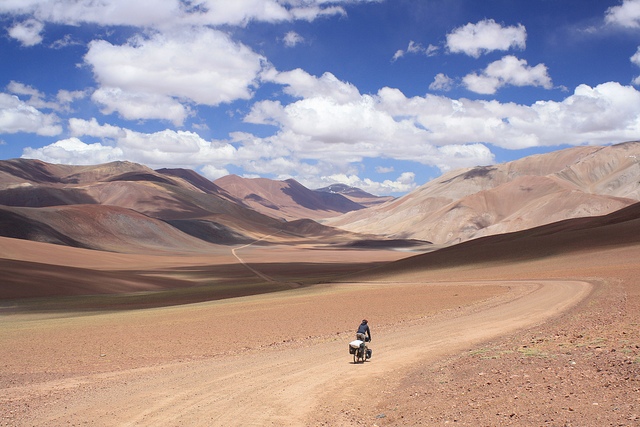 SAG (Servicio Agricola y Ganadero)
As any cycle tourist will soon become aware, the SAG officials will be your biggest headache when entering Chile. They are the guys in charge of ensuring you don’t bring anything into the country which might be a risk to Chile’s animals or plants. Banned goods for import include all meat, cheese, vegetables, fruits and honey. In theory all bags coming into the country will be searched and anything on the prohibited list will be confiscated, which can be a real pain if you’re at a remote crossing and need to carry a few days of food before being able to restock. In practice, if anything is found you will usually be allowed to scoff it on the spot before they let you in, and we haven’t yet heard of any cyclists being fined the $18,000 SAG’s website claims is the maximum for trying to import banned items…

Border Crossings
Chile has borders with Peru, Bolivia and Argentina.

To Peru there is only one option – the straightforward crossing at Concordia on the Panamericana between Tacna and Arica.

To Bolivia there are seven route possibilities. The most northerly is the little used crossing from Charaña to Visviri. The most southerly is the crossing at Hito Cajon between Laguna Blanca and San Pedro de Atacama, which is frequently used by cyclists. The only paved route is that over Paso Chungara/Tambo Quemado on the Arica-Patacamaya highway. Ollague-Estacion Avaroa and Pisiga-Colchane are the busiest of the other options, though these are still on quiet roads.

There are over 40 legal crossing points into Argentina, though not all are open year round. In the north of the country notable crossings which are seasonal are Pircas Negras and Agua Negra. In the southern half of the country many routes are closed by snow in winter, so always check beforehand. For all border crossings, the Chilean Difrol website is a good source of information, as is the Gendarmeria Nacional Argentina site.

Maps
The Chiletur Copec country map (available electronically) was the best we found for Chile. It is available in book form at Copec service stations in the country. While it is of reasonable quality and is definitely more accurate than road maps of Peru or Bolivia, it is not up to the standard of Argentina’s ACA maps. On smaller roads in the north-east it is often not detailed enough or 100% reliable. However if sticking to larger roads, including the Carretera Austral it’s fine.
Weather
Being nearly 4,500km long, at any one time there is a wide range of weather in Chile.

Most cyclists head to the lake district, Carretera Austral and far south in summer (December-March) when the weather is at its warmest. It still rains regularly, but is drier than in winter months when heavy snows can cause road closures. Northern areas of Chilean Patagonia are much less windy than their Argentinian counterparts, but in Region XII in the far south the winds are strong in summer and generally from the west/north-west.

The Puna de Atacama in the north-east of the country rarely sees any rain. Its climate is similar to that of south-west Bolivia and north-west Argentina, though the Chilean side is drier and more deserty. The high altitudes ensure warm days and cold nights throughout the year, and in winter (June-September) nighttime temperatures are regularly -10°C to -20°C, occasionally colder. Prevailing winds are from the west/north-west and can be savagely strong, so any crossing of the high passes between Chile and Argentina is usually much easier if you’re leaving Chile rather than entering.

ATMs
Note that it is more diffficult finding ATMs which will accept foreign cards in Chile than in any of the other 3 countries on this website. Many machines only accept Mastercard and not Visa, so in smaller towns with only 1 ATM you can often not withdraw money if you have a Visa card. If going south to north and entering the country at Villa O’Higgins, the first ATM you encounter is in Cochrane, but this does not accept Visa. Coyhaique will be your first opportunity to withdraw cash.

Road Conditions
Whereas Peruvian road builders zigzag their roads up mountains and Argentinian ones climb in steady curves, Chilean road builders tend to just build straight up hills, then straight down the other side. This, unsurprisingly, leads to steep gradients. It can be hard enough work on the Carretera Austral when the climbs are short and the altitudes low, but is even harder at high altitude on the Puna de Atacama in the north.

We rarely found ripio roads in Chile with particularly bad surfaces, but have met a number of cyclists who assure us that there are many out there.

Getting Transport
Chilean coaches are generally modern, comfortable and run on time, and as with other Andean countries are the best way to get around on public transport. If there is room you will be allowed to put your bike in the bodega under the coach with the other luggage, though rules vary on whether you have to pay extra for this privilege, need to remove parts, or need to box up your bike. Chilean officials (whether it be at immigration posts or in bus stations) tend to be less relaxed about bending rules than others in South America.

Keep a very good eye on your kit at bus stations to guard against opportunist theft. It’s a good idea to buy a cheap plastic bag (of the tartan variety) to put all your panniers in so you only have that and your bike to watch over.

Camping
Camping is common in certain parts of Chile – in the lake district, Aisen, and at many of the country’s numerous national parks. In the north-east there are so few inhabitants and settlements that it is easy to find a spot to wild camp. On the Carretera Austral most land by the road is fenced off so it can be tricky to find a place to put a tent.

Chile is the most expensive country in the Andes. Camping at an organised site in Chile is invariably more expensive than a double room at an hospedaje in either Bolivia or Peru.

Note that on the Puna the atmosphere is so dry that tent fabric shrinks and it can become very difficult or impossible to get your tent poles in. Zips become fragile and regularly break in the dry atmosphere, so treat them carefully. Also be aware of how much damage UV can do to your tent. UV degrades tent fabrics and it is particularly strong in the high altitude areas of the Puna.

Bike Shops
Cycling is reasonably popular in Chile, and as a result in big cities you can often find good bike shops. Santiago has the best selection, where it is possible to get spares and also to buy a mountain bike of sufficient quality for a tour. Coyhaique on the Carretera Austral has a bike shop with decent mechanics who can order you spares from Santiago. Away from the big cities 26” tyres are the easiest size to find.