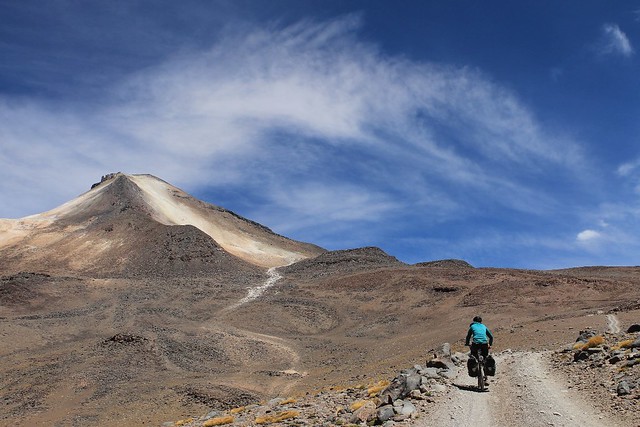 According to the best available list, Uturuncu is the lowest of the 6,000ers in the Andes, and for a number of years it has attracted attention from cyclists interested in finding the highest cycleable road in the world.

The volcano is reached from Quetena Chico on a road which was built to service a sulphur mine, high on the northern peak of the mountain. The mine has now been abandoned, but the road (in 2013) was motorable and almost all rideable from Quetena to the col between Uturuncu’s two summits at 5,760m. It is possible to continue L/N from the col and cycle a bit higher, though the road soon deteriorates and becomes unrideable.

Higher roads have been built, including one on (relatively) nearby Aucanquilcha, though the Aucanquilcha road is in far worse condition and it is not possible to cycle to anywhere near the same altitude as it is possible to on Uturuncu.

View Uturuncu in a larger map